Rotterdam Europort is a section of the port of Rotterdam, the largest port in Europe. Europort is located on an island in the combined estuary of the Rhine and Meuse rivers and is known as the largest oil terminal, but it also has a ferry section. Europort itself is not of interest to tourists, but if you arrived in it, your path will definitely lie in Rotterdam - a major historical and cultural center of the Netherlands. 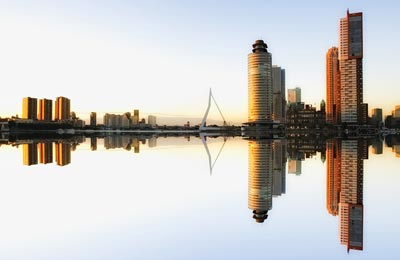 The ferry line between Europe and British Hull is served by P&O Ferries, part of the British P&O group of companies. The modern company was founded in 1960, but leads its lineage with the Peninsula and Oriental Steam Navigation Company founded in 1837 - hence the name P & O. The transition from Europrot to Hull takes more than 11 hours, the ferry leaves in the evening and arrives in the morning, one flight is operated per day.

There are three main fares for travel - economy class, flexible and completely flexible. The latter allows you to change the date of the trip without surcharges. Travel of one passenger in a standard double cabin will cost an economical rate of 140 euros, a flexible rate of 150 euros, and a fully flexible rate of 199 euros. The passage of two passengers by car will cost from 240, 290 and 490 euros, respectively. To transport a pet, a surcharge will be required, which depends on the species and size of the animal. The cost of crossing a car depends on its length and height. Passengers can choose a higher-class cabin, for which you will also have to pay extra.

Groups of 9 people have discounts, there are no restrictions on baggage.

On board the ferry there are restaurants, bars, lounges for entertainment, including casinos, duty-free shops.

You can get to the passenger terminal from Rotterdam-The Hague airport, the road can take up to an hour, depending on the chosen route. The port has developed access roads and large parking lots.

In the port building, the passenger offers a wide range of services, including ticket sales. But to save money, tickets should be bought no later than 2 weeks from the departure of the ferry, you can do this on our website.